Imagine if your dog could talk? What do you reckon would be the first thing your dog would say? Well, I know mine would look for a treat and perhaps a walk in the park! The only place I know where animals have the ability to speak is in the Chronicles of Narnia by C.S. Lewis where sentient animal beings can speak to humans. Now I’m not sure if Christina Hunger who developed the Talking Pet Starter Kit has read this book but her dog, Stella is on the road to conversing with humans through push buttons.

Christina Hunger developed the Pet Starter Kit with her trusted and loyal companion, Stella. Christina is a former speech-language pathologist, who worked with children. She has now embarked on a new adventure in the field of cross-species communication.  A new puppy entered her life and within a very short time it had made a huge impact and consequently, it would change many things. She noticed a similarity in the way this young puppy was communicating with gestures and vocalizations in much the same way a child does before they start speaking.

Christina noticed that her dog,  Stella was understanding words and using body language by whining and pawing at things. She thought that if Stella was a young child she would start talking any day now with her first words. And as dogs do not develop verbal speech Christina wondered whether Stella could communicate words in a different way.

She thought about using the simple push buttons from Learning Resource so that Stella had a way of communicating. So Christina ordered these push buttons and set about first just using simple instructions such as
Outside | Play | Water

She thought about this method of communication through push buttons and thought it must have already been done with canines but unbelievably it had not yet been done. 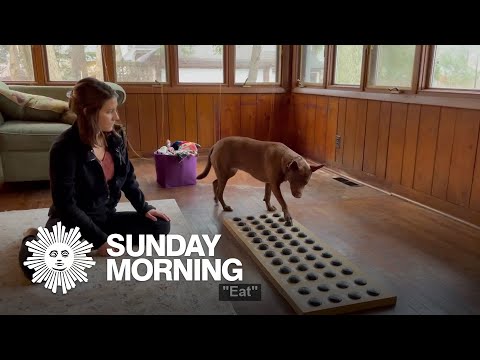 Christina insists that she has never given any treats or anything for pushing a button and the only involvement with food was when Stella pushed the “Eat” button. Initially, Christina’s goal was to teach her dog, Stella words to express her basic needs however she quickly advanced and is now on 48 buttons.

One of the major benefits of this method of communication is that Christina understands Stella a lot more now and has a greater insight into how her dog is thinking. When she sees the words Stella is really excited about she feels she understands what Stella is thinking about.

Types of Words To Use

When first teaching your dog this method Christina recommends the words used should be
1. Frequently used
2. Motivating
3. Simple words

Arrangement of the Push Buttons

With regard to the arrangement of the buttons, there are options. You can either leave the buttons on the board or move them to various locations. For example, you may want to place a button by the back door and use it for “potty” or whatever word used for a toilet outing.

How To Go About Teaching The Technique

Firstly you’ll need plenty of patience and consistency. While talking with your dog you will need to press the button yourself first in order to show your dog what needs to be done. Be patient as you may not get a response straight away.

Book on the topic

Christina has written a book that should be a source of inspiration for many pet owners who would like to explore this fascinating area of cross-species communication.

How Stella Learned to Talk: The Groundbreaking Story of the World’s First Talking Dog

You can record your own voice on these push buttons initially with simple instructions like Play , Potty, Water. Start off slowly with one word and build upon it. As the inventor says you will need plenty of patience and consistency. 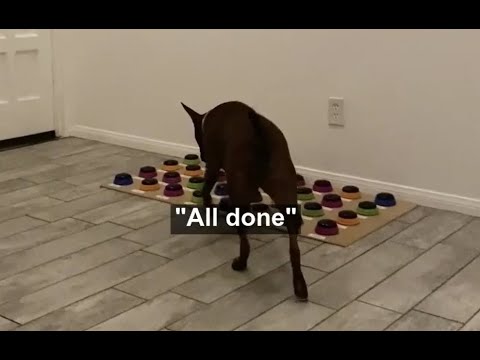 Use your own voice with 4 recordable buttons – teach “outside,” “play,” “bed,” and more! Follow along with the easy teaching guide written by the creator of the talking dog movement, Christina Hunger.

With persistence and consistency, you can teach your dog to communicate with words. As one user described it – It’s a great resource for teaching your pet ACC on a budget.

One user had an issue with one of the buttons getting stuck and was unable to press it. The company was willing to make a full replacement on any faulty ones so that is reassuring. Other users had a problem recording voice as it came out muffled and not very clear. One tip from one user is to speak clearly right up close to the mic and this should help deal with any clarity issues.

Although Christina often describes her interactions with her dog as talking and chatting there would not be universal agreement amongst many dog behaviorists with this description. Many dog behaviorists would argue that the dog does not fully understand the full meaning behind the words that are being pushed. I’m sure Christine and Stella and many other dog owners would argue differently. Whatever the case maybe it is still a fun way for your dog to communicate and no doubt you could end up having hours of fun with the Talking Pet Starter Set. Just be careful if you do decide to place one button as a treat – it could get worn out pretty fast! 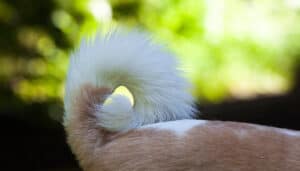 Although dogs cannot talk they can still communicate verbally and also physically with their bodies, especially their tails.  Dog tail positions and the rate of