Although dogs cannot talk they can still communicate verbally and also physically with their bodies, especially their tails.  Dog tail positions and the rate of tail wagging can provide great insights into how a dog is thinking and feeling at that particular moment in time. We look at the different dog tail positions and what they mean along with dog tail wagging to give you a greater insight into the canine world of communication.

Canine tail positions are bursting with meaning, yet one of the most overlooked parts of dog communication. People often think that a wagging tail is a happy tail. A common remark from those who do not understand this form of communication is “the dog’s tail was wagging so I don’t understand why he would bite me”

The 3 things you need to consider when understanding dog tail positions:

Generally speaking, when a dog carries his tail super high it’s a sign of aggression or dominance and a super low tail is a sign of fear or submission. A content dog will keep his tail in a more natural horizontal position, give or take a few inches either way.

When a dog’s tail is horizontal but relaxed
Meaning: The dog notices something of interest is occurring

When a dog’s tail is horizontal but not relaxed, appears stiff
Meaning: The dog views a challenge

When a dog’s tail is somewhere between horizontal and vertical
Meaning: The dog is saying he is dominant

When a dog’s tail is vertical and curved over his back
Meaning: The dog is saying I am confident & dominant and I may act and take action

When a dog’s tail is a bit lower than horizontal
Meaning: The dog feels things are fine in the situation

When a dog’s tail is low, near his legs
Meaning: The dog is saying I am insecure or saddened

When a dog’s tail is low, in between his legs
Meaning: The dog is saying I am afraid and/or I am submissive and want no trouble. 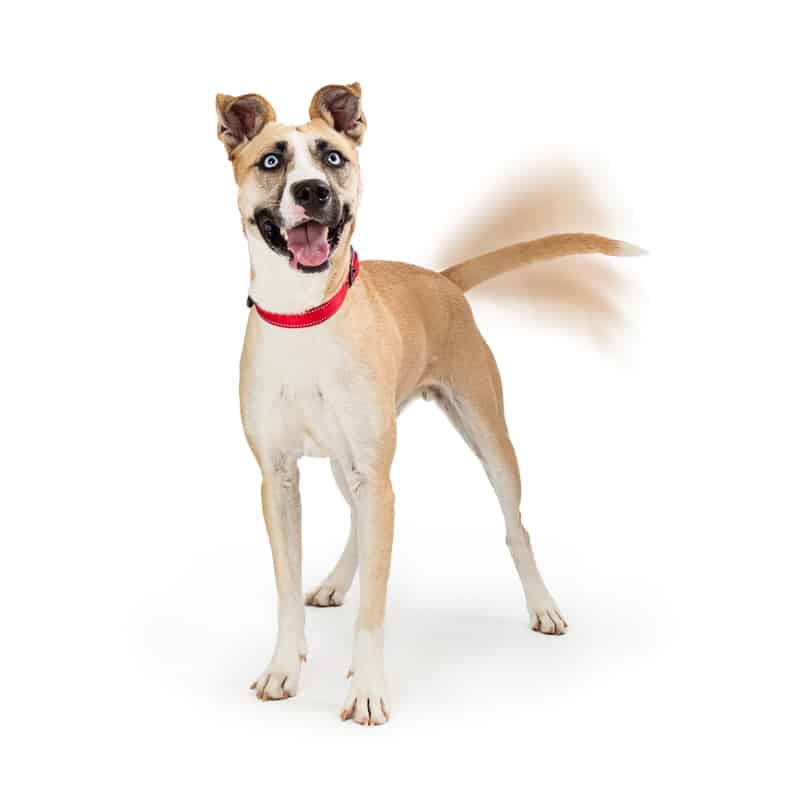 In general, a dog wagging his tail is saying that he is focusing or open to an interaction occurring. Both stoke length and speed of wag have meaning.

Broad strokes of a dog’s tail indicate that the dog is feeling relaxed, whereas short strokes of the tail mean the dog is anxious about something.

Here are some examples:

When a dog’s tail wags with quick strokes
Meaning: The dog is excited; the faster the more excited

When a dog’s tail wags with slow strokes
Meaning:  The dog is insecure and perhaps fearful of the interaction

When a dog’s tail wags with broad strokes
Meaning:  The dog is saying I am friendly and I like you

When a dog’s tail wags with tiny, high-speed strokes (looks like vibrating)
Meaning: The dog is feeling socially challenged and if submissive is ready to run. If dominant he is ready to fight.

When a dog’s tail wags slowly in a horizontal posture
Meaning:  The dog does not understand the interaction

If a dog’s tail swishes to his right
Meaning:  The dog is trying to keep others relaxed.

If a dog’s tail swishes to the left
Meaning:  This will induce stress in other dogs.

For further information, you should check out The Ultimate Guide to Dog Health. It’s complete and detailed, covering all the common health problems with dogs and there is a section on learning how to pick up early warning signs by identifying and accurately interpreting your dog’s body language. All the information is fully supplemented by full-color diagrams, photographs, and illustrations. Well worth it.