Why Do Dogs Carry Sticks?

Why Do Dogs Carry Sticks?

It’s a very common sight in the park to see a dog carrying a stick. It can look quite funny when you see a small dog carrying an oversized stick 3 times his size. And the dog always looks like he is on a very important mission and cannot be disturbed when carrying this very important stick (vis).

You can only wonder what’s going through the dog’s mind and in this article, we are exploring some of the most common reasons dogs carry sticks.

Over the generations, many breeds of dog were used for hunting and sporting activities. They were bred for specific purposes. One of the main activities these types of dogs were involved in was retrieving prey for the hunter. This involved searching for the prey in the grass, woodland, and even water and then taking it up gently in its mouth and bringing it back to the hunter without damaging it. Dogs breeds such as Labrador Retrievers, Golden Retrievers, American Cocker Spaniel, and Irish Setters make great retrievers.

Many dogs today still have that retrieving gene in their DNA. This instinctive behavior is still performed to this day and instead of “prey” will now go after sticks and retrieve them and from a dog’s perspective, this makes their owner proud of a great job of retrieving sticks.

Even wolves and their puppies have been observed carrying sticks. Many reckon that sticks are similar to bones in structure and size so puppies can learn by handling and chewing these sticks.

Intention To Chew Stick After the Walk

Dogs naturally like to chew things. Many dogs out for a walk enjoy the sensation of holding a stick and many will carry the stick for the entire walk and when done will sit down with their new stick and chew away. It’s sorta like a dessert for them after the walk. Nothing feels better than a good chew.

Unfortunately, chewing sticks is something that should be discouraged. The risks are quite similar to chewing cooked bones. Parts of the stick can come off as dangerous splinters and cause cuts and lacerations. Sometimes parts of the stick can lodge in the mouth. Infections and abscesses can also occur and in some serious cases, surgery is required.

Before dog toys and chewing devices were invented dogs had to reply on sticks and bones for entertainment. In the past dog owners did not have access to the dog products available nowadays and a stick was a cheap and available toy.

So if your dog still wants to carry a stick it might be a good idea to have a tasty treat at the end of the walk that can be exchanged for a splintered stick. If your dog is well trained then you can always use the commands drop and leave it when your walk is complete.

Dogs love attention and will sometimes go to any lengths to get their owner’s attention. Very similar to small kids who may like to show off and show how great they are. Well, it’s the same for canines.

They will seek out sticks and bring that prized stick to the owner. Often times the owner will praise the dog and he will then march onward, head held high while proudly carrying his prized possession – the stick.

Some dogs just want to have fun all day and if allowed would play fetch with an available stick from sunrise to sundown. This applies to many of the so-called retriever dogs like Labradors and Golden Retrievers..They will literally play till they drop and what’s more fun than finding a stick, bringing it back to the owner and he throws it.

This activity obviously makes them happy and it can be viewed as a bonding exercise with the owner. After all, it takes two to play fetch and throw. Having a strong bond with your dog is important and will be very useful when you need to engage in some dog training. Your dog will be more alert to your needs and will do his best to please you.

Puppies and younger dogs like to explore and taste new things with their mouths.

From an early age, puppies use their mouths to explore, and what could be more interesting than a tasty stick. From a pup’s perspective this new item, the stick, smells really good and may even have some tasty bits of bark still attached. If a young pup is teething they will usually seek out objects to chew so as to relieve the pain and provide comfort. Sticks fit the bill perfectly from their perspective. However as mentioned earlier you should really avoid having your dog chew a stick due to the risks of splinters breaking off, cuts, lacerations, blockages

Habit – Have Carried Sticks As A Pup

Puppies are playful and as dogs grow older they may still play the games you once played when they were still in puppy-hood. Sticks are widely available in most parks and if your puppy enjoyed carrying a stick when he was younger then most likely he will continue to carry sticks into adulthood.

Dogs are like humans in some aspects – we’re both creatures of habit. We both enjoy a certain routine and will have a preference for certain things or objects. Once a routine establishes and all parties are happy to go along with it then it becomes part of the way things are. So dogs who have always carried a stick will not suddenly stop this activity someday because a blogger on a website says sticks should not be chewed. They will carry that stick proudly, 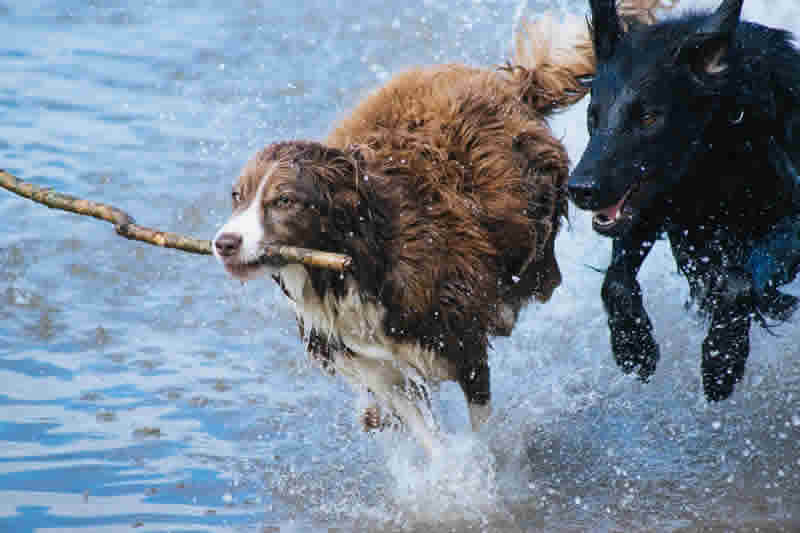